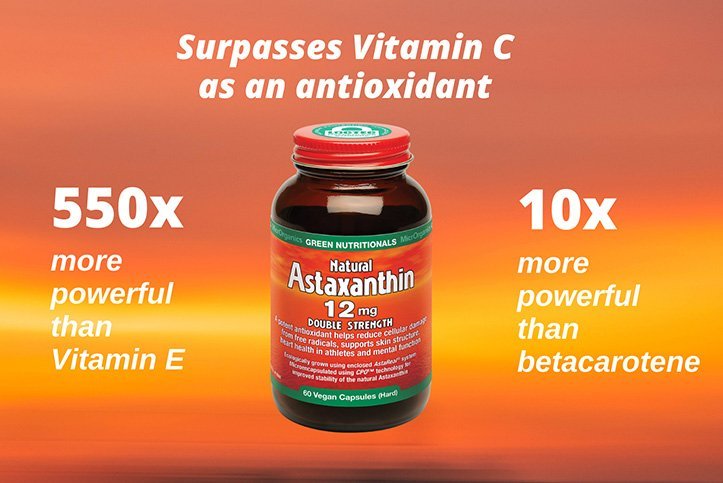 Have you heard of the exciting health benefits of astaxanthin?

Astaxanthin is gaining wide attention because it promotes overall wellbeing, as well as offering many benefits in overcoming health challenges.

Astaxanthin: what is it?

Astaxanthin is a fascinating carotenoid: a red-colored pigment found in plants, algae and bacteria, and produces the bright yellow, orange and red colours in our fruits and vegetables. It occurs naturally in marine life, making red salmon red, and gives prawns and lobsters their red-pink colour.

Currently it’s explored for its benefits (1) in maintaining skin health and skin repair, and in supporting healthy cholesterol, as well for its useful effects as an antioxidant. It’s an anti-inflammatory agent, and is available from natural sources, as well as from synthetic sources.

Let’s look at the top health benefits of astaxanthin.

Essentially, antioxidants protect you from dangerous free radicals (4): these are molecules which occur naturally during your body’s metabolic processes. Free radicals have been implicated in many health conditions, ranging from wrinkled skin—they break down your skin’s collagen—to decreasing cognitive performance.

Antioxidants reduce the oxidation in your body which causes inflammation. This inflammation is believed to be responsible for some of the health challenges of aging.

2. Boost your immune system with astaxanthin

When used as an antioxidant, astaxanthin is 6,000 times more powerful than vitamin C, and may help to reduce the inflammation produced in infections.

But how does astaxanthin boost your immune system?

It’s believed that astaxanthin performs at the cellular level: it increases your body’s production of white blood cells—white blood cells detect and fight any pathogens which enter your body.

Cholesterol is found in your blood, and your body needs it. However, when cholesterol reaches high levels, it can deposit itself in your arteries, restricting the healthy flow of blood. Parts of these deposits may even move into your bloodstream, closing off blood vessels.

4. Protect your skin from ultraviolet (UV) damage with astaxanthin

Skin is damaged by daily exposure to the sun, so astaxanthin’s protective effects for skin may be particularly important to Australians.

In its role as an antioxidant mopping up free radicals, astaxanthin has been found to accelerate exercise recovery time in athletes. It also offers endurance benefits. A study showed that astaxanthin boosted athletic performance by 62% (when compared to a placebo) within six months.

Those athletes taking astaxanthin not only increased their athletic ability, they could train more.

Intriguing animal studies of astaxanthin showed that astaxanthin encouraged the burning of body fat—a fascinating effect of astaxanthin, if this effect is also shown in human studies.

6. Smooth your skin: astaxanthin helps to maintain your skin’s moisture

Many studies show that astaxanthin is powerful in fighting the dangerous free radicals which produce inflammation. This inflammation is believed to have damaging effects on your mental function.

A study with mildly cognitively impaired elderly people which lasted over 60 days showed that astaxanthin has excellent potential to improve brain health.

However, the most exciting studies for the effects of astaxanthin on brain health suggest that astaxanthin may fight mental fatigue as well. (7)

(1) Astaxanthin in Skin Health, Repair, and Disease: A Comprehensive Review

(2) Astaxanthin: A Review of the Literature

(5) Astaxanthin for heart failure: a friend or foe?

(7) Effects of Lutein and Astaxanthin Intake on the Improvement of Cognitive Functions among Healthy Adults: A Systematic Review of Randomized Controlled Trials (PDF)